Port Mahón in Menorca, Spain also has historical ties with Vice-Admiral Collingwood and staged its own commemorative event at the end of March 2010. The following article explains those links…

One of Menorca’s foremost groups, the Asociación Menorca Britannia actively encourages and promotes a better understanding of the historic and cultural links between the Menorquin people and the British community. Since 1708 and the arrival of the British during the reign of Queen Anne, subsequently to become a British Crown Colony on the signing of the Treaty of Utrecht in 1713, there has been a unique and deep rooted British influence (and mutual friendship) which can be clearly seen by today’s visitors. Although Great Britain voluntarily handed Menorca back to the Spanish crown at the Treaty of Amiens in 1802 that friendship continues to the present day.

Cuthbert Collingwood’s outstanding career is known to most with an interest in naval history and is only overshadowed, perhaps mistakenly, by that of his great friend Admiral Lord Nelson. It was after the unfortunate and premature death of Nelson early during the Battle of Trafalgar that the true courage, humanity and dedication to his country were shown by the great man we are, this year, commemorating and when his connection with Spain and in particular Menorca begins.

Bravely leading the battle from the front until it’s final conclusion, Collingwood showed his great humanity during the storm that followed by sending out boats to rescue hundreds of Spanish and French seamen from stricken or sinking ships. He arranged the safe landing of these “prisoners” in Cadiz and into the hands of the Governor of Andalucia, the Condé de Solana. A friendship was cemented with the gift of barrels of wine being sent to the British ships. Reportedly in return, a return gift of a keg of British beer and some cheddar cheese was given by Collingwood. Many letters between the two men display their mutual respect and friendship thereafter.

Following the Battle of Trafalgar Collingwood expected to retire after a lifetime at sea, however this wasn’t to be. The Admiralty being short of senior commanders refused his letter of resignation and ordered him to Port Mahón, Menorca to take charge of the British Mediterranean Fleet. Britain and Spain having an agreement to jointly use the port facilities of the world’s second largest, deep water natural harbour. As always his King and Country again came first. 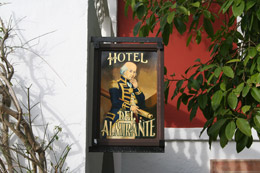 During the last five years of his life Collingwood dutifully carried out his orders, his fleet blockading the French south coast ports, patrolling the Gulf of Leon and assisting the Spanish in defending their mainland coastline and the Balearic Islands.

As his shore base, Collingwood took residence in a splendid colonial style house “Fonduco” overlooking the harbour above where his flag ship was anchored. This is now a charming privately run hotel retaining all the features and alterations carried out during his time here.

It was in the year prior to his death and during the Napoleonic War that Collingwood ordered an escort of frigates to a merchant ship bringing to Menorca one of the world’s largest organs ever manufactured. This was installed in the parish church of Sta. Maria in Mahón. With over 3,000 pipes and four keyboards the organ is played every day and is just part of the heritage left by Lord Collingwood on Menorca. This world famous organ is also celebrated it’s 200th. anniversary in 2010.
During his last year Collingwood was ailing and in pain spending many periods bedridden – it is now believed that he was suffering from stomach cancer – but he stoically “soldiered on” until being obviously very ill and dying he was carried to his ship to make his way to England. Unfortunately he died on board still within Menorcan waters.

The Asociación Menorca Britannia is proud to have arranged the 200th anniversary commemoration in Menorca of the life of Lord Collingwood, completing the full circle, so to speak, from his place of birth to his last honourable post and eventual place of death. 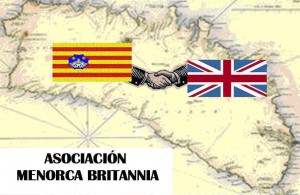