The Newcastle upon Tyne Royal Grammar School (Performing Arts Centre) Eskdale Terrace, Jesmond, Newcastle upon Tyne, NE2 4DX (next to Jesmond Metro station).  Free admission to Society members and pupils and staff of the RGS, £2 to others.  (On this occasion, any Sea Cadets and Sea Scouts attending in uniform will also be admitted free of charge) Free parking on site. 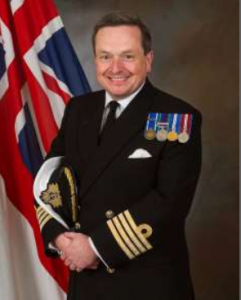 Captain Andy Jordan will be known to those who attended the 2015 ‘Toast the Admiral’ event at Tynemouth, for, on that occasion, he delivered the oration.  In doing so, his enthusiasm for, and dedication to, the work of the Royal Navy was evident and in this memorial lecture, he will take the opportunity to expand on the theme.

Captain Jordan is currently the Officer Commanding HMS COLLINGWOOD, the Royal Navy’s Maritime Warfare School in Hamshire, named of course for our Admiral.  Judging by his CV (below), Capt Jordan is well qualified to discuss the character and role of the contemporary Royal Navy and his talk is eagerly awaited by the Society.

After graduating from the University of Exeter, Captain Jordan joined the Royal Navy in 1992 as a full career Warfare Officer. His early career was spent at sea in watchkeeping appointments in HMS CAMPBELTOWN and in HM Yacht BRITANNIA and, as Navigating Officer in HMS SOUTHAMPTON.

After qualifying as a Principal Warfare Officer in 1999, he completed an appointment in HMS CORNWALL, which included a global deployment where he acted as Group Ops Officer for a Task Group of 9 ships.

Selected for sea command and promotion to Lieutenant Commander in 2000, he firstly commanded HMS BRECON in the Northern Ireland Squadron 2001-02 and then HMS RAMSEY in 2002-03, which included deploying his ship from the UK to conduct operations in the Arabian Gulf.

Selected for further promotion and sea command in 2004, he firstly commanded HMS IRON DUKE 2005-07 and then HMS SUTHERLAND in 2007. Immediately post command, he spent 9 months as Staff Operations Officer to the UK Maritime Component Commander in Bahrain, with responsibility for the day to day operations of the RN ships and submarines in the Gulf.

Returning to the UK, he joined the Permanent Joint Headquarters in 2008 as part of the team that prepared UK forces for deployment around the world, setting and assuring the delivery of training for Operations in Afghanistan, Iraq and the wider Middle East.

He joined the Ministry of Defence in Whitehall in 2010, as the desk officer responsible for the financial programming of new Maritime and C4 ISR equipments. He was subsequently appointed to command the Royal Navy Presentation Team, where he spent a fascinating 12 months briefing diverse groups around the country on the Navy’s key messages.

On promotion to Captain in September 2013, he returned to the role of financial planning, as Deputy Assistant Chief of Staff in the Resources and Plans area of the Navy’s Portsmouth Headquarters.

He was thrilled to assume his current post, in command of HMS COLLINGWOOD and the Maritime Warfare School, in March 2015.

He graduated from the Advanced Command and Staff Course in 2004, earning an MA in Defence Studies in the process.

He is married to Catherine, a Fleet Air Arm Lynx observer, who has also commanded at sea. He has 4 daughters.