A very different Trafalgar Day to that which we have become accustomed over recent years.  As previously advised, events did take place, in one form or another and here are some of the highlights:

Captain Catherine Jordan RN, Commanding Officer, HMS COLLINGWOOD, who was supposed to deliver this year’s oration at Tynemouth until COVID got in the way, sent this:

“Sadly due to CV19, the Commanding Officer, HMS COLLINGWOOD, Captain Catherine Jordan, could not join other supporters at the memorial in North Tyneside on Trafalgar Day nor in Vice-Admiral Lord Collingwood’s home town of Morpeth, but instead has raised a toast here in HMS COLLINGWOOD at 1200 on 21 October 2020 to remember him as the national hero he is.

The ‘Toast to Vice-Admiral Lord Collingwood’ was conducted in the Wardroom of the Training Establishment in Fareham, in front of the bust of the Admiral generously commissioned and donated by HMS COLLINGWOOD Officers’ Association and a copy of the Henry Howard portrait commissioned in 1807 following the Battle.

Collingwood saw the first action of Battle and assumed command of both columns of ships when Nelson fell. He also took the Fleet to seaward on completion of the Battle which no doubt saved them following such a sever conflict. We are proud to bear the name and he remains a national hero worthy of our continued admiration.” 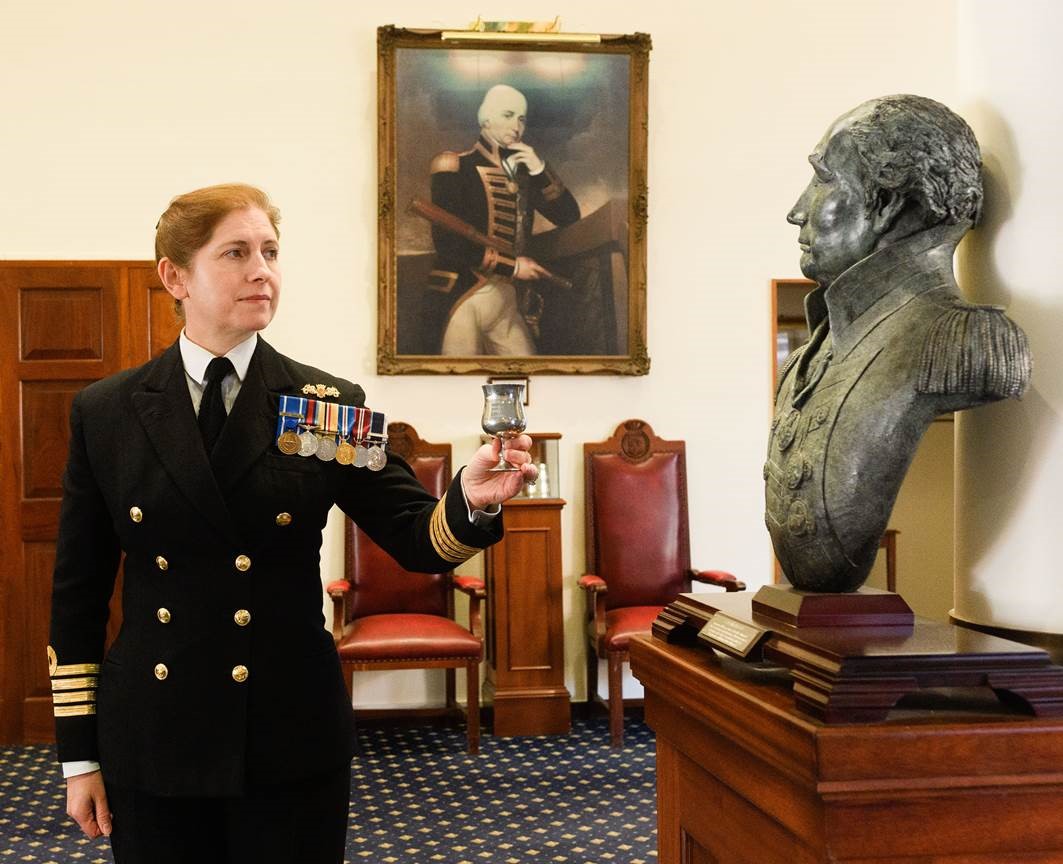 We were fortunately able to get a wreath arranged at the much-reduced service in the Cathedral crypt in London today.  It was reportedly a sombre affair, with just six socially-distanced invited representatives.  We are most grateful to Genevieive St George, who was representing the 1805 Club and helped to make arrangements for us and to Admiral Lord West, Baron West of Spithead, GCB, DSC, PC, who kindly laid the Society’s wreath on Admiral Collingwood’s tomb.  The first image (courtesy Genevieve St George) shows our wreath, the second (copyright www.sandrarowsephotography.com ) shows Admiral Lord West prior to laying the wreath. 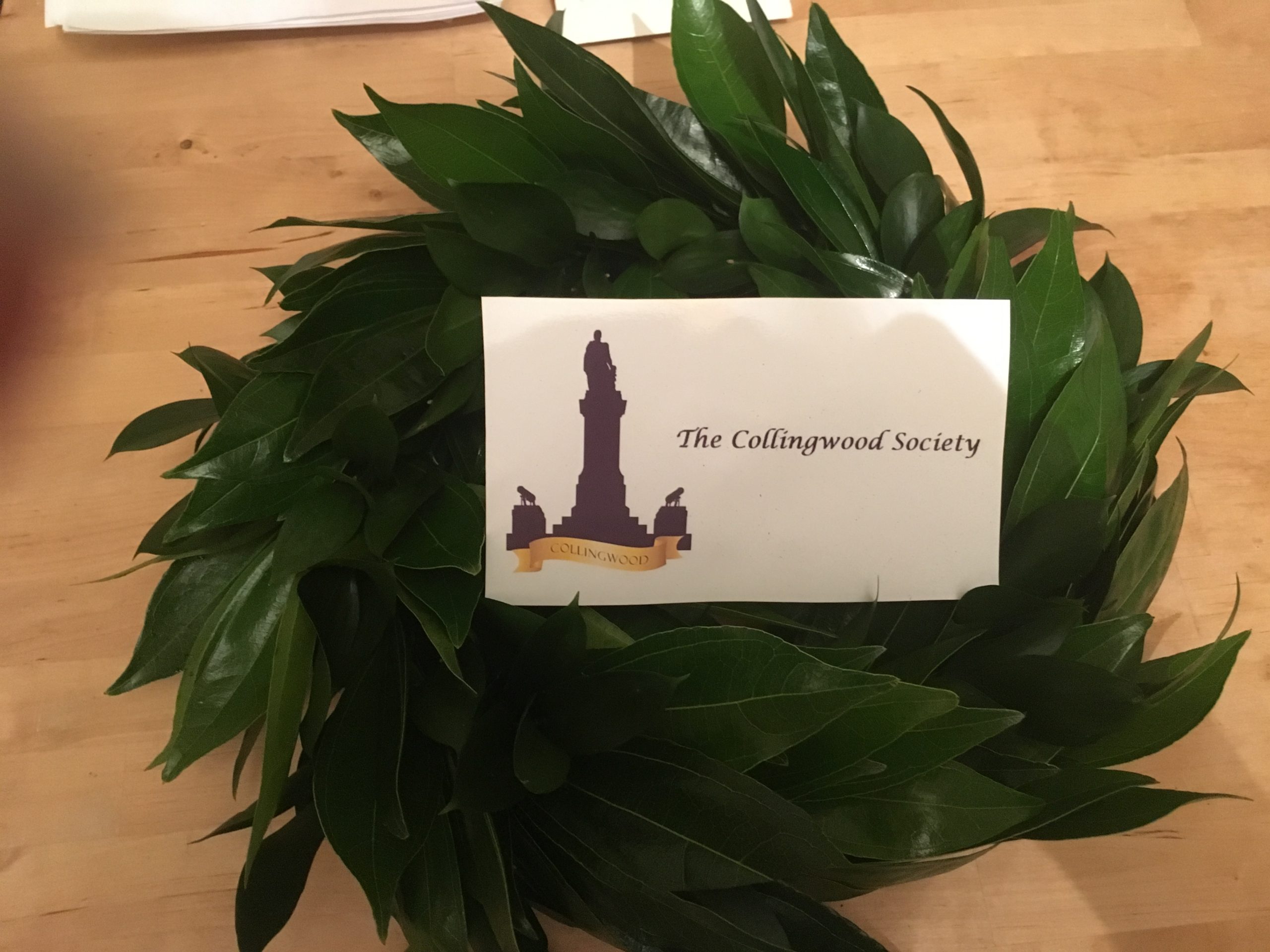 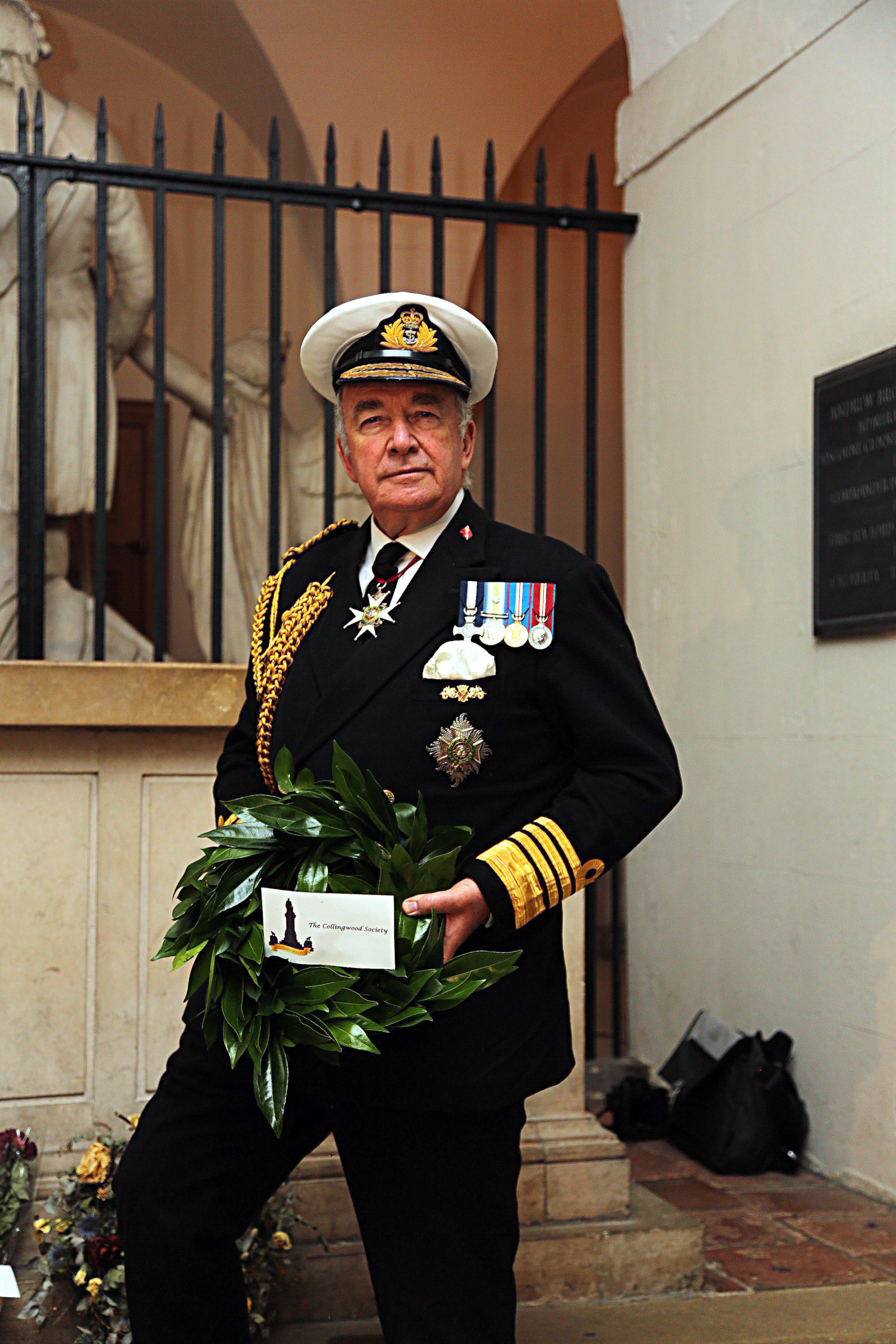 This video (recorded in part under very windy conditions at the Monument) was released today on North Tyneside Council’s Facebook page.  As you will hear, the Society’s Chairman adopted a somewhat different line to his words, adding a bit of perspective to the challenges of the current pandemic.

Our annual Trafalgar Day ‘Toast the Admiral’ event may have been scuppered by the Covid restrictions – but we have pre-recorded some messages to help mark the occasion. Jon us in raising a glass for Admiral Lord Collingwood. •Opening message from Cllr Wendy Lott, Chair of North Tyneside Council, •Message from Capt Steve Healy calling the toast •Message from Commodore Phil Waterhouse ADC RN, Naval Regional Commander, Northern England

Some Society members did venture up to the monument today and, at a suitable distance from each other, toasted the Admiral.  The Society could not of course, be seen to encourage people to gather for obvious reasons and those who chose to go there did so of their own will and to get some fresh air into their lungs!  Ian Wallace sent in this picture of a deserted monument. 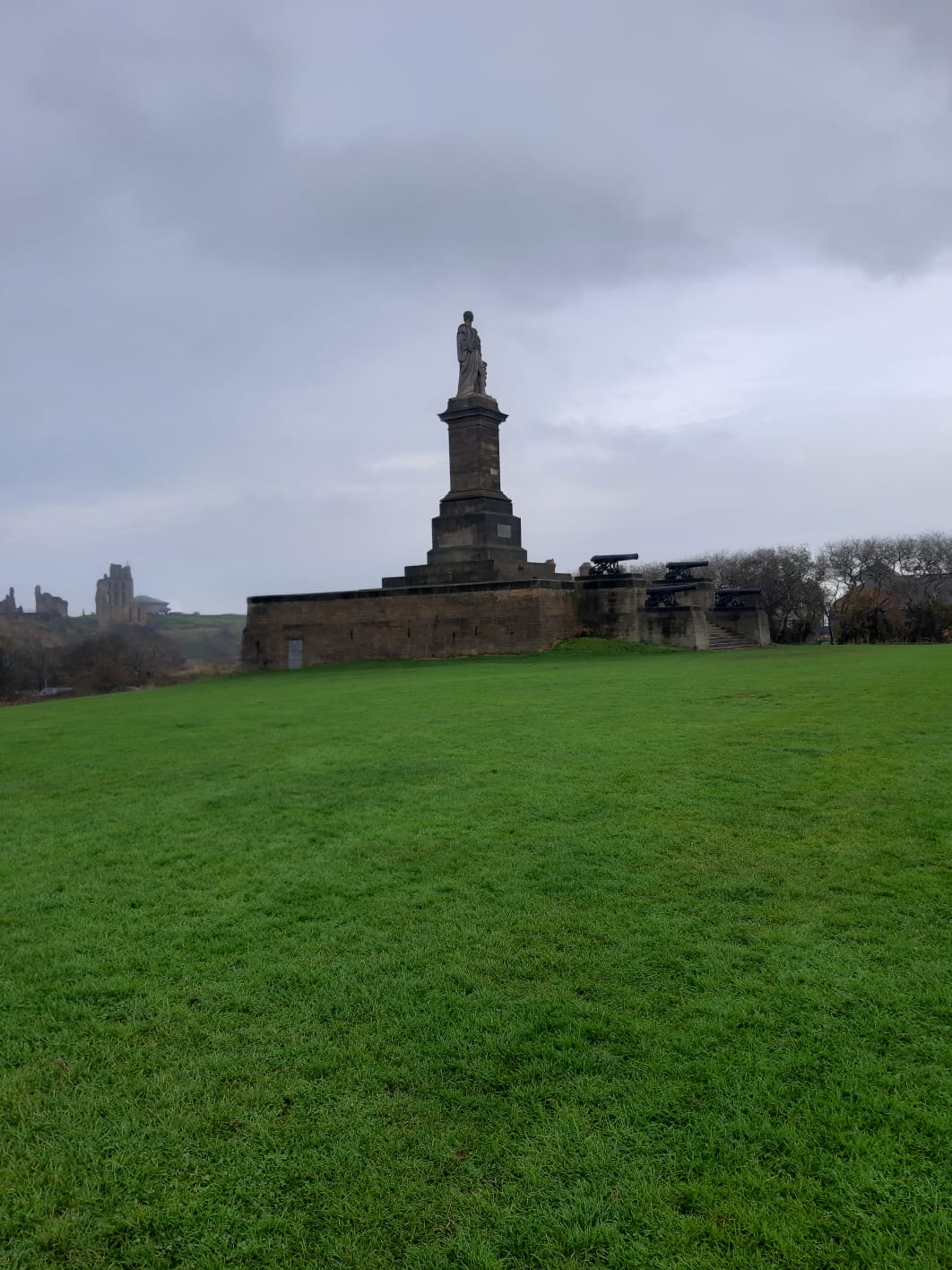 The Town Council in Morpeth decided late in the day to hold a restricted commemoration, limited to six invited guests and fortunately Society Trustee Nigel Collingwood was one of them.   Wreaths were laid at the Admirals bust in the Town Hall.

A ‘Toast to the Admiral’, led by Rev’d Simon White, Rector of Morpeth, then took place at the stepping stones on the River Wansbeck looking across to the infamous “quarterdeck”.  Word had spread locally and a small but dedicated group, suitably distanced, attended this second event. 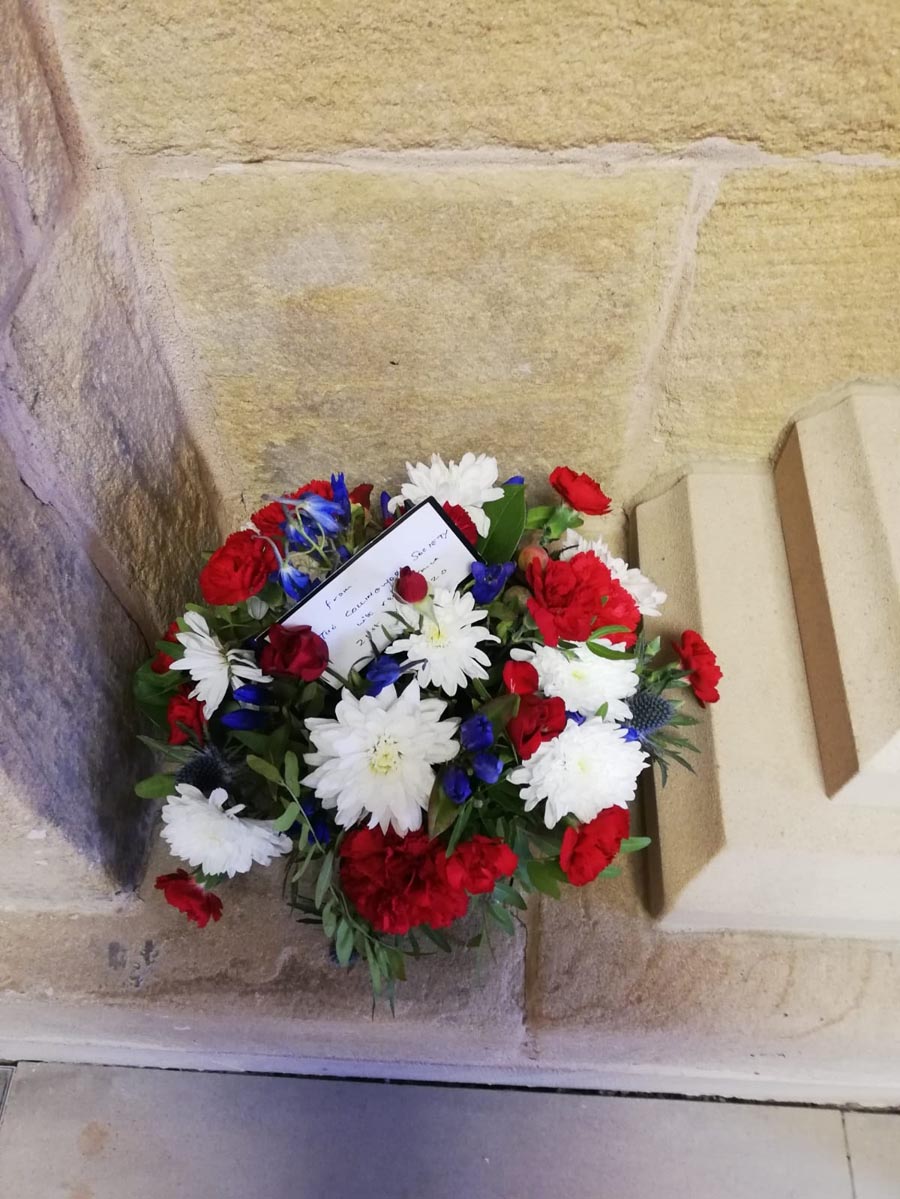 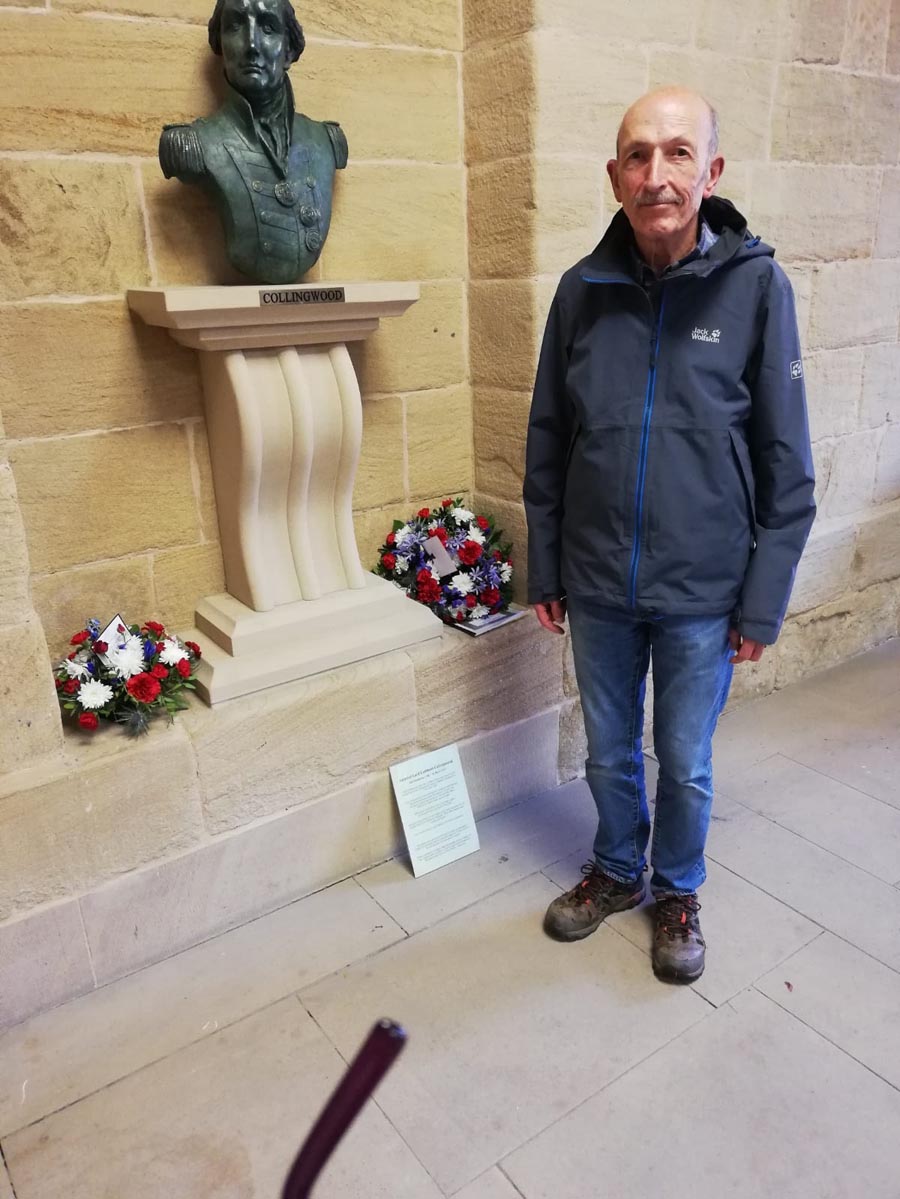 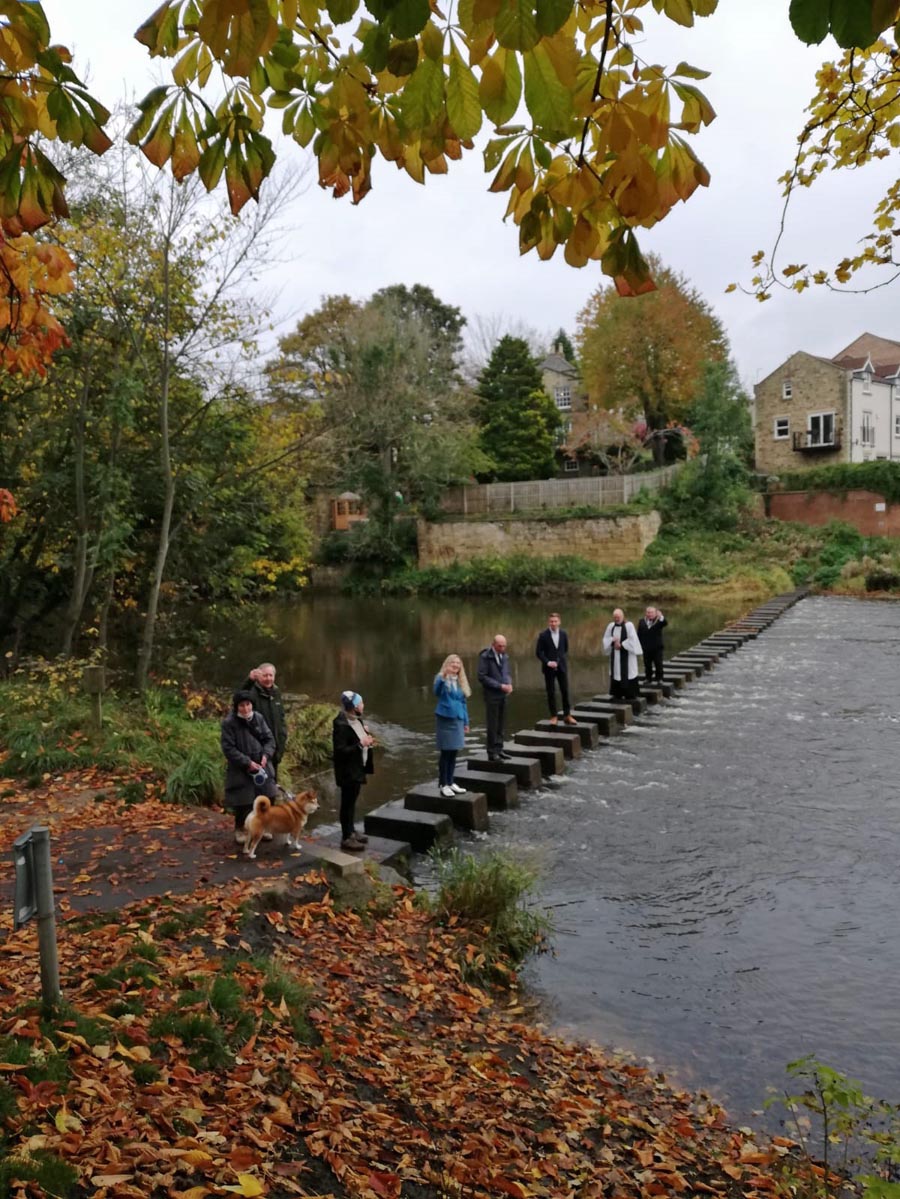 Again, a much-reduced ceremony this year at St. Mary’s Churchyard, but the Commanding Officer of TS LEVIATHAN, Lt-Cdr (RNR SCC) Brian Gray and Chairman of the Unit Management Team and Collingwood Society member, Mr David Byrne, ensured Trafalgar Day and the memory of HMS LEVIATHAN‘S Master were marked.  A wreath was laid on the grave of John William Trotter by the pair and two ladies from the Heritage Centre kindly took photographs.   They were also accompanied by a small and charming mouse, who has set up home in and around the Trotter headstone.  He was previously using old (and somewhat weather-worn) wreaths, so now has a nice new roof to last him through the winter, having now woven himself into the fabric of the Trotter story. 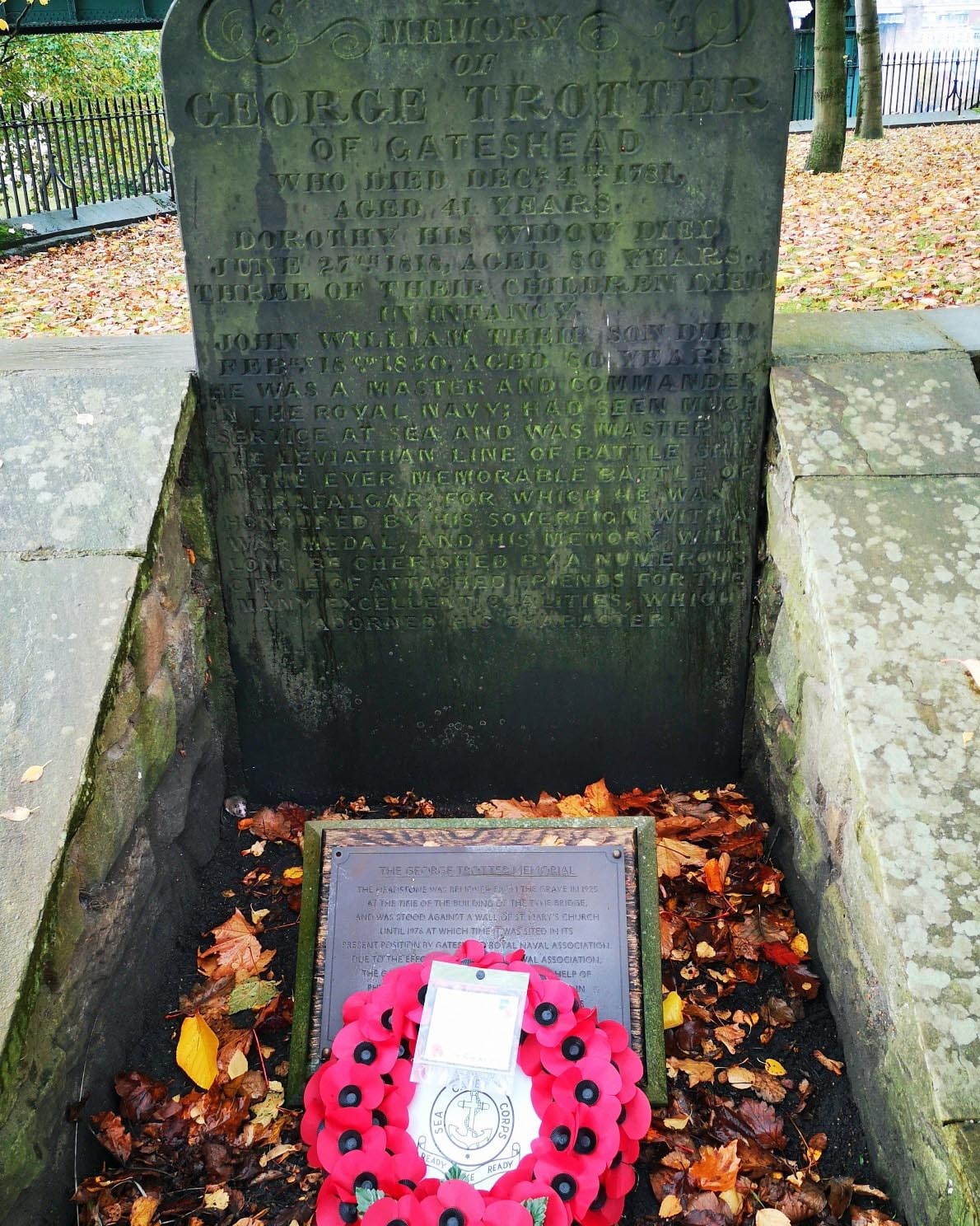 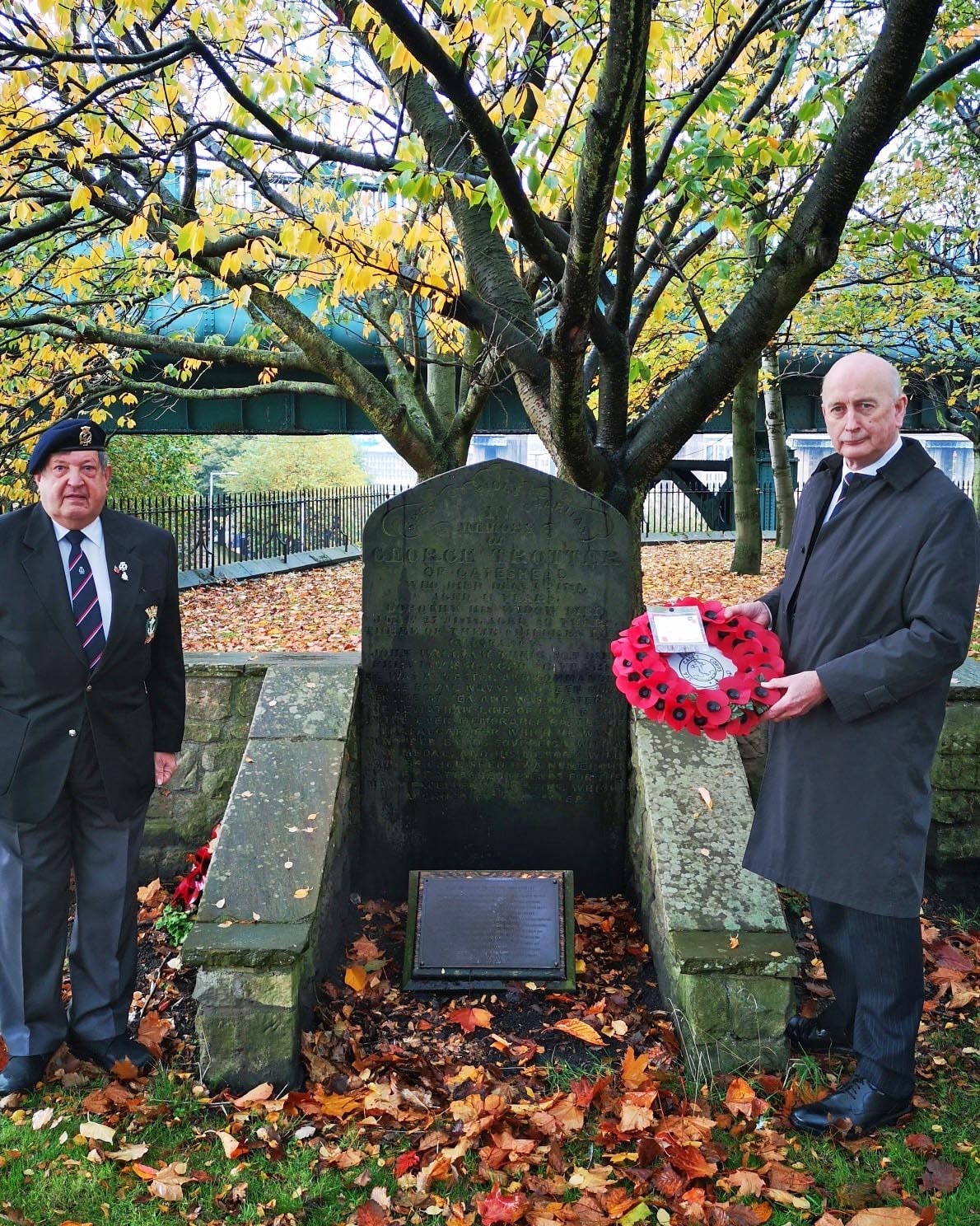 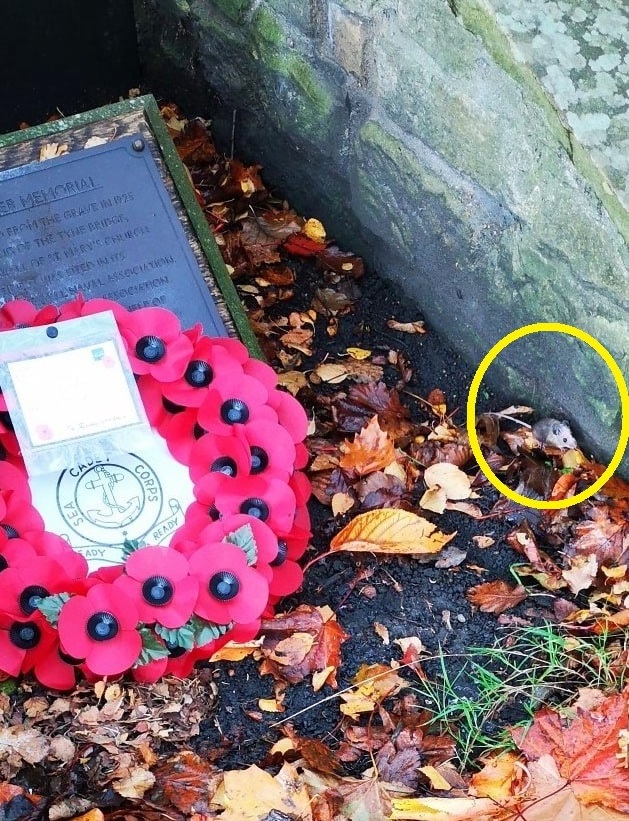